16 Jun There Is Only One Adam Smith-AIER

Posted at 12:33h in Uncategorized by one80Admin 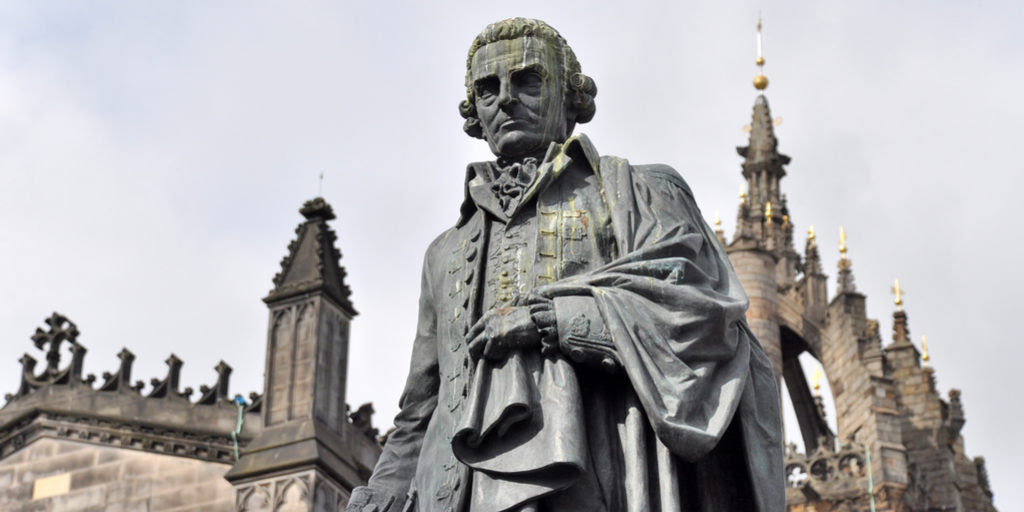 In 1759, Adam Smith published the first edition of The Theory of Moral Sentiments (hereafter, TMS). As soon as TMS was published, Smith began a process of revision and improvement that would occupy him for much of the rest of his life; the second edition was revised and published in 1761; the sixth and final edition was published in 1790, the year of Smith’s death.

Smith did other things, of course. He gave lectures, and visited and argued with his friend David Hume (a book about their relationship, The Infidel and the Professor, was my favorite economics book of 2018). Oh, and Smith took time out to write another book, a rather different book, entitled The Wealth of Nations, which was published in 1776.

This has led some Smith scholars to wonder about the relationship between the two apparently different, even conflicting, projects. As Jacob Viner famously put it, “Many writers, including the present author at an early stage of his study of Smith, have found these two works in some measure basically inconsistent.” A number of scholars have sought ways to reconcile the two “inconsistent” Smiths.

It is perhaps appropriate that the most successful of these is another Smith, Nobel Prize winner Vernon L. Smith. He argued that while there seem to be differences, the “two views are not inconsistent, however, if we recognize that a universal propensity for social exchange is a fundamental distinguishing feature of the hominid line, and that it finds expression in both personal exchange in small-group social transactions and in impersonal trade through large-group markets.”

I was struck by how straightforwardly and obviously true this claim is, at least the claim about there being one, consistent and coherent, Adam Smith. The easiest way to get purchase on what Smith was about is probably the set of podcasts Russ Roberts and Dan Klein, both then of George Mason University, did in the spring of 2009 (get started here).

I’ll just give a summary; please either read the fuller statement of the argument, in the terrific new book Humanomics by Smith and Bart Wilson, or listen to the EconTalk podcast by Roberts and Klein. Two warnings: Nothing I’m saying is original; rather, it is borrowed from these other interpretations I have cited. Second, I may have this wrong, because the degree of summary is extreme: there are more than 1,000 pages just of main text in TMS and The Wealth of Nations.

Adam Smith was trying to work out a theory that matched the human sense of propriety with the objective worthiness of the actions and opinions that provoked the judgements of propriety and impropriety we all feel. David Hume had said that reason is, and should be, the slave of the passions. Smith didn’t entirely disagree, but he had a more optimistic view of the direction of the system. Smith embodied Hume’s passions in the “man in the breast,” or the feelings we have about the actions of others and ourselves.

But there is another actor in Smith’s system: the impartial spectator. This fellow plays many roles, and is deeply reflective. Each of us has his or her own impartial observer, but at the same time our shared notions of propriety mean that we all appeal to the same impartial observer if we live in the same culture. As I said, it’s reflective, and reflects back and forth.

Our moral sentiments are enshrouded in the perceptions of our impartial spectator. There are four “faces” of the impartial spectator; Smith (perhaps uncharacteristically) gives a concise overview in chapter 4 of section I of TMS:

When we approve of any character or action, the sentiments which we feel, are, according to the foregoing system, derived from four sources, which are in some respects different from one another. First, we sympathize with the motives of the agent; secondly, we enter into the gratitude of those who receive the benefit of his actions; thirdly, we observe that his conduct has been agreeable to the general rules by which those two sympathies generally act; and, last of all, when we consider such actions as making a part of a system of behaviour which tends to promote the happiness either of the individual or of the society, they appear to derive a beauty from this utility, not unlike that which we ascribe to any well-contrived machine.

This is the statement of Smith’s life project. It’s the reason he revised the first edition of TMS five more times, refining and improving it. And it is also the reason that he took time out from this project, and wrote The Wealth of Nations. Smith concluded, just as Hayek later concluded, that human nature did not naturally or easily accept or understand the importance and value of the system of commercial relations. The first three of the “sources” of moral sentiments were based on emotions, or passions, that we all feel naturally. Over time, society had derived a set of conventions which Smith called “propriety,” or the perception of whether an action is right or wrong, in a wide variety of contexts.

But the commercial context was new, and growing. Commerce is far from perfect — Smith is famously critical of groups of businesspeople, or for that matter college professors — but the “beauty” of the utility of the commercial system was not readily apparent to this sense of propriety.

Smith concluded that the fourth “source” of moral sentiments needed some help, some explanation. Being able to comprehend the circumstances where individuals acting primarily to benefit themselves might actually benefit others, or benefit the larger society by producing more opulence and revenue, is not something human beings can do very well.

Smith firmly believed that, on the first three causes at least, it was better to have close personal relationships and trade based on personal knowledge and trust. But these do not operate well at scale. And scale is what division of labor wants, and needs. Division of labor is what causes opulence; as Smith put it, in the title of chapter 3 of book I of Wealth of Nations, “The division of labor is limited by the extent of the market.” The fourth cause, the utility of the unfettered scope of commercial activity, ultimately suggests the necessity of rethinking systems of propriety based only on the first three sources of moral sentiments, without suggesting that those sources were ultimately inferior.

So, Smith took a detour, inserted a lengthy parenthesis, in his life’s work on TMS and wrote The Wealth of Nations. Having solved that problem, or at least made a start on it, he returned to revising and extending TMS for the rest of his life.

It is for this reason that Adam Smith can say in TMS, “How selfish soever man may be supposed, there are evidently some principles in his nature, which interest him in the fortune of others, and render their happiness necessary to him, though he derives nothing from it except the pleasure of seeing it.” We care about each other, and we are naturally cooperative.

But that’s not enough. Walter Williams, also of George Mason, often gives an illustration that makes clear what is at stake. I’ll paraphrase the example this way. There are more than 8.5 million people in New York City; at the simplest level, they need a whole lot of meat and potatoes to survive.

Because of division of labor, there is a lot of meat on the hoof in Texas; there are lots of potatoes in Maine. The folks in Texas and Maine are good people; they would likely send some of their food to New York City just because they care about the inhabitants. But it wouldn’t be enough; in fact, it wouldn’t be nearly enough. There would be no large city, or even a small city, on Manhattan if we depended on the basic mutual care and sympathy of Smith’s first three causes.

In a commercial system, by contrast, there is another reason to expect the beef to be sent from Texas, and the potatoes from Maine, to New York City: profit. More simply, it is in the interest of beef suppliers and potato suppliers to send their valuable food to a faraway city, thereby ensuring that the people in the city survive, even though sympathy alone would never guarantee that outcome. As Smith puts it in The Wealth of Nations:

It is not from the benevolence of the butcher, the brewer, or the baker, that we expect our dinner, but from their regard to their own interest… This division of labor … is not originally the effect of any human wisdom, which foresees and intends that general opulence to which it gives occasion. It is the necessary, though very slow and gradual, consequence of a certain propensity in human nature which has in view no such extensive utility; the propensity to truck, barter, and exchange one thing for another.

In other words, we are psychologically equipped to connect with commercial society. But the reasons that it is important to do so are less apparent to the primitive, unaided impartial observer than most of the more easily accessible sentiments based on warm emotions such as sympathy or love. It may be that self-interest is good for the larger society, but that takes some explanation. Our first impulse is to look at the motives of the actor, and judge the propriety of the action on those motives, rather than on the effects of the action.

In short, Smith realized that his system, to be coherent, required that he take a decade out of his main work on TMS and explain why the larger system of commerce was not only consistent with, but essential to, a world where people care about each other and can actually take care of each other. To put it more bluntly, if you really want to help other people, especially poor people, you need to support the growth of commercial society all over the globe.

When you think about it, it’s enough to make even the most aloof impartial spectator feel all warm inside.